This freshwater/brackish-water guide service grew quickly to be one of the largest and most-respected such groups in the USA. 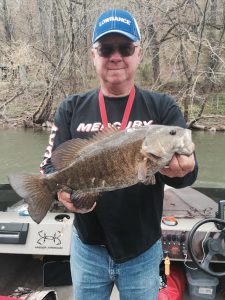 Along the way, Ken appeared in 11 made-for-TV fishing shows; was inducted into the “Freshwater Fishing Hall of Fame.” authored six book and hundreds of articles. His service to the Maryland BASS Federation included: two terms as President; founded the award winning Youth Activities program; was named “Man of the Year,” “Federation of the Year,” five national Conservation Awards and 13 Region Conservation Awards, mostly for his work to protect the Potomac River.

Clients have included Presidents of the United State; Supreme Court Justice; two SecNavs; many congressmen; dignitaries from many foreign countries; Secretaries from several USA branches; various sports figures and the highest positions in our amazing military complex. I’m proud to have guided so many youngsters such as Leo, and the ladies that just bust-bass including Crit, Laura and “my model.”

Without clients such as Doc, Coop, Lenny, John, Jon, Dave, Bill, Jay and so many more that account for thousands of pay-days, I may still be in construction.

Ken has appeared as a feature speaker at virtually every outdoor show in the region.
Ken’s wife Maggie plays a major role in the Penrod ventures that include Camp Sycamore (Ken’s summer youth camp), PPC Publications, Ken Penrod’s Seminar Series and Lou Magazine.

Ken specializes on various waters in the region including the Tidal Potomac River, Upper Potomac River, Juniata & Susquehanna Rivers of PA and most of the tidal rivers of Maryland’s Eastern Shore.

Who is Ken Penrod?

Well, for openers, Ken is enshrined into the “Freshwater Fishing Hall of Fame, as a Legendary Guide.” The only other Marylandl guide of this exclusive group is Lefty Kreh and he passed. That’s “good company.”

Ken is a Pennsylvania product, but as he likes to tell it: “I had to leave after a stint at Pitt–before I starved.” Born in Portage, PA, to Kenneth & Arvilla, with “Bro” Bill and Sisters Joyce and June (deceased), Ken was always the “outdoorsman,” founding the Portage Junior Sportsmen Club, and a two-time president of his high school Junior Sportsmen Club.

A 17 year career in the construction industry was just another “challenge” to Ken and he became a “foreman” at age 21, and a “superintendent” at 23, and a VP at 30 and an owner at 35. Along the way he won national awards for “Design Award of Excellence,” and more.

Fast Forward to 1982: Ken formed a hunting and fishing guide service that is known as “Ken Penrod’s Life Outdoors Unlimited,”

Meanwhile—he has been one of the most active businessman and conservationist in the region.

Member of Outdoor Writers of America since 1985

Since 1982, Ken has written fishing reports on “waters we fish,” between mid-March and end-October. This forum is a “classroom” of sorts where we can “guide” anglers to great “spots” and recommend the best fishing equipment to help our followers—and our sponsors. What other guide service or news media can say that?

For 30+ years Ken has provided seminars at virtually every outdoor show of substance that are extremely well attended and advertised. The show season is highlighted by the 9-day “Great American Outdoor Show” by NRA at the Farm Show Complex in Harrisburg, PA. Ken and his guides are product-specific and season-driven.

Guide to Some Mighty Big People

Various Secretaries of US Government

Expert on the Following Waters:

Ken Penrod’s Summer Youth Camp—Camp Sycamore (for boys 12-18, conducted from our lodge in Pennsylvania where the fishing and shooting arts are taught.)

Lost upon MD DNR’s current regime are the accomplishment listed below that were fostered and in many cases unsupported by state officials during a time period of 35 years by Ken Penrod. Many “Fisheries” personnel have come and gone but Ken’s work never faltered. It seems that the current management has adopted a “it’s not my job” mentality when we bring concerns to them. The past leaders such as Bob Bachman, Torrey Brown, Leon Fewlas and others would ALWAYS champion our concerns, even when legislation was required. Today the tidal fisheries is more of a club than management arm—and we have lost our way. I represent thousands of anglers in this state and they depend on me to protect our fisheries..

Over the years Ken’s work was recognized by many on both a national and a regional level. The list of awards include:

Ken Penrod’s protection of, as well as promotion of the tidal Potomac River went far beyond his conservation efforts. There can be no man alive or dead that has done more. Examples include: